Broomfield, Colorado, is an interesting town because it’s both a city and a county. It’s a planned community that takes pride in its natural areas, open space and commercial and residential regions. Broomfield has a population of approximately 60,000 residents, an aspect that exudes a welcoming, small-town vibe.

Broomfield may be a small town, but it’s a mighty hub for shopping, entertainment, and the arts. Its largest shopping venue is the Flatiron Crossing Mall. This mall has 198 stores and includes a movie theater and an outdoor lifestyle center in its vicinity. FirstBank Center is where you can watch shows like rodeos, concerts, truck races, and circuses. The center is also a place for community events and trade shows. The Paul Derda Recreation Center offers fun activities for family members of all ages. It contains an indoor water park, kids’ play areas, a climbing wall and a spa area for parents to relax while the kids are playing. Take a stroll through Broomfield Sculpture Trail. The trail is lined with beautiful stone, bronze and metal sculptures created by local artists. Broomfield is a bike rider’s paradise because it possesses a mass trail system that links its lakes and parks together. One of the most popular scenic bike routes in the city is Rock Creek Trail, which connects Josh’s Pond to Stearns Lake. The trip between the lakes is 1.3 miles long. Visit Rock Creek Farm for autumn fun. During the fall season, Rock Creek Farm offers hayrides, a family fun area with inflatables and a petting zoo. A visit to this farm also gives you the opportunity to pick out a fresh pumpkin.

More information about life in Broomfield, Colorado can be found here:

The majority of real estate properties in Broomfield are single family residences. Nearly half of Broomfield’s residential properties were built during the late 20th century, and many of them have two to four bedrooms. Once you settle into this city, you’ll notice that it’s very family-oriented, especially since kids ages five to 17 make up approximately 19 percent of the population. This town isn’t just a good place in which to raise a family; it’s also has a healthy economy in which I am proud to call home.

If you have questions regarding homes for sale in Broomfield, Colorado, please reach out to us today.

OPEN HOUSE THIS SATURDAY 10/8/22 11am-2pm. Come check out this Cozy Countryside home situated on an oversized cul-de-sac lot! This home has been very well-maintained and...

Two-story home on one of the largest lots in Westlake, a community with no HOA. All 4 bedrooms are located upstairs. The bones seem to be solid but the property is dirty,...

This solar-powered home offers a modern open floor plan with 9-foot ceilings on the main Living Level, a large kitchen with sleek stainless appliances including the refri...

Courtesy of Kerrie A. Young (Independent)

Courtesy of Kerrie A. Young (Independent)

Welcome home to this wonderful spacious home in the Cottages in the Broadlands. Enter into the vaulted living room that flows to the dining room which is open to the la...

This charming Villa Ranch home is located in the sought-after 55+ community of Skyestone. Nestled steps away from one of the community's greenbelts, w/ a trailhead that...

Rare opportunity to live in this Gated, 55 + Community. Clubhouse with indoor pool, fitness, hot tub, entertaining area and fireplace. This 3 Bedroom home has a wide open...

The content relating to real estate for sale in this Web site comes in part from the Internet Data eXchange (“IDX”) program of METROLIST, INC., DBA RECOLORADO® Real estate listings held by brokers other than Real Estate Company are marked with the IDX Logo. This information is being provided for the consumers’ personal, non-commercial use and may not be used for any other purpose. All information subject to change and should be independently verified. IDX Terms and Conditions

Looking for the perfect home in the perfect place? Chances are you'll want to check here first. 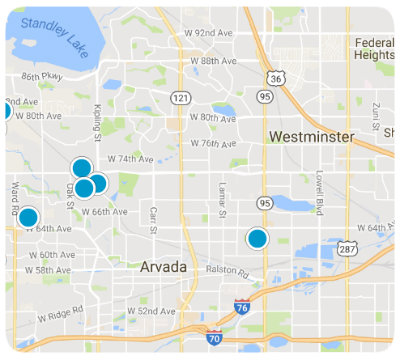